THREE BLUE EYES is closing in on 100 miles of training!

We logged another 8 miles this morning on run #16 of this season, and team is looking mighty fine.

A couple memorable moments of late:


DONKEY-KONG
Now, Chris and Claire and, well, just about everyone I've told, think I must have been hallucinating. But if the pups could talk, I bet they'd back me up. So a couple weeks back, I decided we should have an adventure. We took a route we'd never taken before and the sun had not yet come up and it was overcast. We were passing by a farm house and a wooded area just beyond it. Suddenly the pups got very interested in something happening to our left. So interested, they started to veer off in that direction. I was still trying to get my "quad legs" but managed to look up and, I swear it, I saw a donkey with a big donkey head charging toward us. Fortunately, it swerved before it got to the road. (Images of Midsummer Night's Dream flashed through my head.) I'm thinking there must have been a fence, because I can't imagine what else would have stopped the beast. But the dogs thought that it was pretty exciting, and it took every bit of "know how" (which wasn't much at that time) to bark out "on by" commands and adjust our speed enough to discourage any kind of encounter. A few minutes later, I realized we were headed toward an intersection with a blacktop road with traffic. I had to do an "about face," which in mushing terms is a "come haw" on a narrow little country road, but I'll be darned if we didn't succeed. And that was that adventure!


LOOSE DOGS
Sheesh! What is up with the crazy loose dogs that seem to materialize out of nowhere. I remember as a kid, that was one of those things that worried me when I road my bike. Fortunately, I do not recollect any serious encounters then. But THREE BLUE EYES seems to be a magnet for them on our training runs. I am SO proud of these pups and grateful to Rita Wehseler for the extraordinary training she's done with them, because they are incredibly friendly, non-aggressive, and responsive dogs. They have yet to engage with these loose mongrels, even when one was nipping at Lydia's behind, as it was today. They stayed focused and kept on running. The three Rottweilers or Chocolate Labs (or whatever big burly brown dog breeds they were) that were barking and running in a field towards us, also today, had me a little worried, but once again, the team showed its ability to "take the high road" and not engage in the shenanigans.


WHO'S IN CHARGE HERE?
So, Rita warned me that at some point, Penya would test me, that such a phenomenon is typical when a rookie driver enters the scene. It was hard to imagine happening, because Penya is such an awesome lead dog. And I'm still not sure she actually tested me so much as I may have confused her. But for about 10 days, Penya seemed to get strong-willed about directions. On one run, we hadn't even gone half a mile when we came to a stop sign and she tried to "come haw." I wanted her to go straight, but she kept trying to turn the team around. Soon after, when I wanted her to go straight ahead, she kept trying to take the team "haw." But it feels like we reached a "meeting of the minds" during the past few runs. I've been chattering less while we're running and am using more boisterous, clearer sounding commands, and while it may take a second for her to process, she's getting it right now. I think I'm figuring out my timing a little better, too.

MUST. WEAR. GOGGLES
We had our first wonderful run with snow falling on Saturday. Unfortunately, it wasn't just falling. It was aiming. At my eyes. I felt like mini-frozen projectiles had honed in on my corneas! No matter what I tried, I could not fend them off, and at times I had one eye or the other closed. And then there were the times I had to close both eyes at the same time, at which point I stopped the team. It was SO cold I could barely feel my fingers, which is OK as long as they're frozen in a position that allows us to use a little bit of gas. But I really can't run with my eyes shut. Just seems foolish (though I suspect my strong-willed Penya could find the way home!). So, it's time to break out the ski goggles and face the facts (such as they are through amber-tinted lenses).


SCREAMERS AND A CHEERLEADER
I now have two screamers on the team. That would be Elias (whose screams I can handle) and Ginsberg (whose screams are nothing short of horrific). When they're in harness, the screaming is all about "Let's get going!!!!" Unfortunately, Ginsberg (big Mama's boy) also screams in the dog yard when I'm out of his sight. It's been funny, though, to watch him imitate his teammates. He's attempting some mild jumping, encouraged no doubt by Greyling's amazing feats of levitation. For as shy as that girl is when she's not in harness, she's a wild one when she's ready to get going. I love watching her lithe beautiful form extend vertically, as if the higher she jumps the sooner we'll take off. The pups find all this excitement contagious, and after we stop for a water break, they're slamming into their harnesses, screaming, and jumping to get going way faster than I can hop back on the 4-wheeler.

I can't wait till there's enough snow to hop on the sled. So please, everyone, do a little snow dance for us. (Or I'll post a video of all the screaming-Ha!)

Now, to get a feel for what it's like to blast off from the dog yard with 6 fast sled dogs attached to a 1-ton 4-wheeler, here's a little video footage that Randy was kind enough to shoot on Saturday:

So last week, THREE BLUE EYES and I were minding our own beeswax, cruising along a gravel road at sunrise, surrounded on all sides by corn fields recently mowed flat, when all of a sudden, what should appear, but a big ole truck with big ole guys decked out in BLAZE ORANGE.

(For the uninitiated, blaze orange is the craziest neon color that folks wear during deer-hunting season so they'll be recognized as human beings who should not be shot. But wait, why do people wear camouflage to hunt. I'm totally confused now.)

The two big ole guys slowed down and yelled at me: "YOU SHOULD BE WEARING BLAZE ORANGE!!!"

Now, back in the day, I probably would have crumpled and cried if I'd encountered these gents, because I really don't like big ole angry guys yelling at me in a mean or mad way. But mushing, I guess, has toughened me up a bit, because I pointed to my SAFETY YELLOW jacket with REFLECTIVE STRIPES and shouted back, "Dude, I thought this was loud enough."

Fortunately, I lived to tell the tale, and a number of friends firmly suggested that I, in fact, don BLAZE ORANGE if I was planning to run my pups during deer hunting season. And so I took myself to my favorite thrift store and found a rather large BLAZE ORANGE jacket, then went to a fabric store and picked up some BLAZE ORANGE webbing and fleece to craft something for the pups. I cannot tell you how many silly questions I fielded by clerks at both stores. "So, what are you hunting, little lady, Moose?" Ha ha.

Mostly they were stunned when I told them I'm a musher, and with a big ole grin on my face, explained that I was trying to keep my dogs and me from being shot. Seeing as how I live smack-dab in the middle of Minneapolis, I suppose I shouldn't have been surprised by the next questions that followed: "So, where exactly do you do this? And don't you need snow?"

It was closing in on 9 pm (and 9:30 is my bed time on nights before I run dogs, since I need to rise at 4:30 am to get Ginsberg and me an hour north to hook up with the rest of the team) so I had to pass on the opportunity to be a goodwill ambassador for mushing.

Honestly, I've found it's kinda fun to wear BLAZE ORANGE and to decorate the THREE BLUE EYES team and the quad I use to train with splashes of the neon color as well.

I am happy to report that as of today, we've built up our runs to 9 miles, and the team is looking mighty fine.

Here, have a look! This little video (with apologies to Junior Walker, whose body of work I've just rediscovered!) is a paean to BLAZE ORANGE (sort of):


* I wonder how many times I can get away with pointing out my supercool safety yellow jacket with reflective stripes? If a person doesn't work construction, how often do we get to wear such awesome garb?

Last Saturday, THREE BLUE EYES practiced the fine art of passing another team (and being passed by a team).

Wooooo doggggies! That is one challenging maneuver to learn. The goal is for the dogs not to interact at all. We had more than few rough starts. (Mainly rookie driver errors -- I kept giving the command "on by" WAY too soon) Thank goodness Randy came along and shot video. I've been studying it a lot (and cringing at my shrill, overly loud and obnoxious commands, which you will NOT hear in the video below-ha!). I keep practicing different ways of giving commands while I'm in the car all alone, but nothing is sounding right yet. Any and all tips welcome!)

So, here's a little video of some of our better moments of late. There's one sequence of the pups jumping that's so silly, I had to run it in slow motion so I could label the jumpers.

The team we're "chasing" and the team we're passing is Chris Johnson's awesome 10-dog team. Chris is such a trooper to work with me.

Things are going to get REAL interesting once we get some snow and I switch to a sled. Seems the more I learn, the more I find I still need to learn.

Will I be ready for my first race in January? 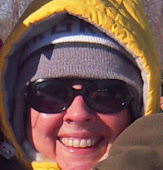 Adventure of a lifetime

Some say it's never too late to live your dream. I plan to find out. Here's what happens when a half-pint, half-Latina, middle age transplant from Texas turns Minnesota musher.
Don't miss a single episode!

Hey! Wanna come along for the ride? Join me!

IT'S A HUSKY THING. Among this team of canine athletes are 3 blue eyes and 9 brown eyes. Allow me to introduce 6 fast sled dogs. 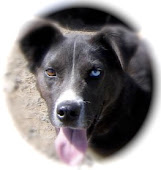 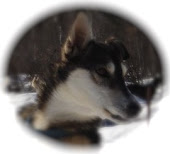 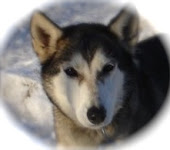